Police are warning drug users about the dangers of a potentially fatal substance that is known to be circulating in the UK.

This follows a number of drug related deaths in England over the last few weeks which have been directly associated with pink coloured ‘ecstasy’ type tablets.

PMA (Paramethoxyamphetamine) is a highly toxic stimulant drug that has been found by forensic scientists in tablets that look similar to ecstasy tablets.  The pills are the same shape and size as an ecstasy tablet but are often pink instead of white and usually have the letter ‘M’ on them, although the logo may vary.  PMA is a class ‘A’ drug. 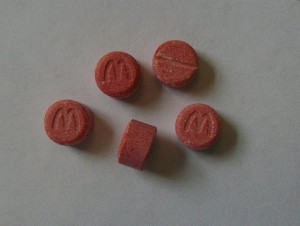 “PMA is a stimulant drug similar to ecstasy, but these particular tablets do not have the same effect or take effect as quickly as an ecstasy tablet.  Users may believe they have taken a ‘weak’ ecstasy tablet, when they have actually taken a tablet containing this highly toxic substance.  They may then be tempted to take more tablets to achieve the desired effect, increasing the risk of a potentially fatal overdose.

“Quality assurance is not something applied to illicit drugs, a fact that is increasingly supported by forensic analysis.  Drug dealers are only interested in making money, so users can never be really sure what they are taking or what is contained in a substance when they are supplied by illegal sources.  Users need to be aware of the dangers and understand the potentially devastating effect it can have on their health.

“With summer officially here, many people will be heading out to enjoy themselves at various events across the country and they may come across these tablets. I would strongly advise them to avoid such products and report any information to the police or by contacting Crimestoppers anonymously on 0800 555 111.”

Further information on the risks associated with drugs misuse can be obtained from Know the Score www.knowthescore.info – part of the Scottish Government’s information service for parents, children, adults and professionals